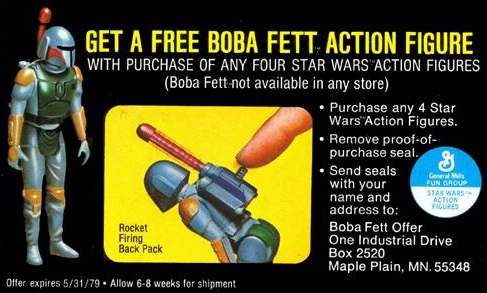 
Since 1979, toy discussions the world over have ensued regarding the removed rocket-firing feature of Kenner's Boba Fett action figure. And the urban legend is true - it was the death of a child who was asphyxiated by a Mattel Battlestar Galactica missile that triggered the historic change. However, up to that point, Kenner had worked dilligently in an attempt to make their toy safe for children.

Mattel's troubles with the Battlestar Galactica toys came to light on December 8, 1978 when the Consumer Products Safety Commission (CPSC - whose standards are given the force of law by Congress) announced that there had been 3 formal reports (and 4 more under investigation) of children inhaling or swallowing the toy missiles. Although the toys passed then-current safety regulations, Mattel agreed to put warning stickers on existing warehouse inventories. This was the first public acknowledgement of a safety concern with the Battlestar Galactica toys. Then on December 25, 1978, 4 year old Robert Jeffrey Warren was playing with a Mattel Cylon Raider when the missile discharged into his mouth and got stuck in his larynx. He was asphyxiated and his brain robbed of oxygen for an extended time. After the missile was removed he spent days in the hospital, but the damage had already been done and his brain no longer functioned. Just a toddler, Robert Jeffrey Warren died on December 31, 1978.

On January 11, 1979 news of the death was coupled with an announcement from the CPSC that Mattel was instituting a missile recall program. Newspaper announcements in 10 major cities carried the message urging parents to either dispose of the missiles or mail them back to Mattel in exchange for a Hot Wheels car. Other newspapers relayed the story in addition to it being reported on NBC's Today Show, but many believe the recall should have had much more publicity. Of course by this time parents had actually been writing Mattel to inquire about replacements for the easily lost missiles given that 2 million of the toys had been sold since their debut in August 1978. Because of the critical nature of the situation, not only would the requests for more missiles go unfulfilled but the toys would be redesigned for 1979 so that the missiles could no longer leave the firing chamber.

Back in Cincinnati, Kenner had their own issues with the Boba Fett figure under development. The concept model (known by collectors as the "kit bash" version - a term meaning "built from model kit parts") was made from three Star Wars figures and a Mattel Shogun Warrior figure. This version featured a sharply pointed missile but it was soon revised to have a bulbous tip at the final concept which was the version largely publicized on the action figure packaging promotions. When the figure was in actual product development it took on its familiar form and the early L-slot version of the figure featured a rocket with a rounded, conical tip. That mechanism could be triggered by a slight sideways tap so it was redesigned to prevent accidental firing. The updated design deemed by collectors as the J-slot version solved that issue by requiring the mechanism to be pulled down and held before releasing the launcher. This style of Boba Fett prototype was first shown in Tomart's Action Figure Digest magazine issue #20 (November 1994) which ran an interview with former Kenner test technician John Howison. Howison performed safety testing on the Boba Fett figures and was still in possession of 2 L-slot and 3 J-slot Fett prototypes at the time. The magazine article was the first exposure collectors had to the J-slot prototypes and it offered a fascinating glimpse into the progression of the figure design from one of the very people tasked with safety testing it. Through a Cincinnati newspaper ad, Howison was alerted to collector demand for the prototypes and after coming forth he was contacted by AFD for the story. Additionally, in February 2001 I conducted an in-person interview with John Howison to expand on the details and delve further into his recollections of the time.

According to John Howison, the J-slot design presented a different safety problem altogether wherein the small stem of plastic in the center of the J could be broken off resulting in a very sharp "splinter" that could get into an eye. This image shows one of the J-slot test specimens where the extension had been bent, but not quite broken during stress testing. A number of other J-slot prototypes in collectors' hands have this extension completely broken off indicating that those had been actual destructive test specimens. Kenner engineers attempted to address this new issue by making the stem shorter and slightly thicker in order to strengthen it.

In January 2018, I obtained information from Jim Kipling, Kenner's former Vice President of Legal, as well as Tim Pine, Kenner's former Vice President of Quality/Safety, which sealed the Kenner story once and for all. There had been concern about the safety of the Boba Fett internally, which is corroborated by the design iterations as well as by John Howison's testing experience. Pine also stated that there was some additional discussions by Marketing in regards to potentially tethering the Boba Fett missile to the launcher, but that was dropped as a poor sales concept.

Tim Pine was also part of a TMA (Toy Manufacturer Association - now "Toy Industry Association") board of safety experts at the time which drafted rules that eventually were adopted by the CPSC to the effect that no "small parts" such as the Boba Fett and Mattel missiles (which have their own legal definition) can be launched by a toy. This would have been proposed months after the Mattel recall at the earliest given the generally slow pace of governmental action.

Jim Kipling stated that in a meeting with Joe Mendelsohn, president of Kenner at the time, that both he and Tim Pine advised the removal of the rocket feature from the Boba Fett. This was most likely based on the January 11 news reports of the death of Robert Jeffery Warren and was a mere 4 weeks before the 1979 New York Toy Fair. Kenner would need to debut a non-firing Boba Fett figure so there would have been a rush to update the catalog and action figure display for the event. Mattel's own products and promotions were updated for Toy Fair where they would formally debut non-firing Battlestar Galactica toys. In the Kenner 1979 Toy Fair catalog, the Boba Fett caption simply states: "HAS A LASER RIFLE AND A BACKPACK" which, given the empty space, was most likely cut down from: "HAS A LASER RIFLE AND BACKPACK WITH TWO SPRING-LAUNCHED ROCKETS" as noted in the January/February 1979 Product catalog. This was an easily manageable change to make on such short notice, especially since there was no photo to alter. The task of creating a physical display piece would have been fairly easy since it only required pasting photostat onto blank cardboard with no mention of the rocket-firing feature. The first card design actually included a projectile warning across the top but that text was removed by the time the sample figure was created. Most interesting though is that the figure used for the Toy Fair sample was actually a rocket-firing prototype since the physical change to the figure couldn't be made on such a tight timeline.

The final firing version was complete with painted accents and copyright markings and even got as far as having some mailer box samples created but it all came to a halt. Although, it is interesting to consider that it took a Mattel toy to both introduce and subsequently remove the firing rocket feature from the Boba Fett action figure.

Interestingly, the fact that the coroner wrote Star Wars toy put into mouth - missile ejected into bronchial area on Jeffrey Warren's death certificate just goes to show how prevalent Star Wars toys were in the popular culture at the time and perhaps how easily it and Battlestar Galactica were confused by the average person. Then again, in mid-1978 George Lucas famously sued the creators of Battlestar Galactica for generally copying the whole look and idea of Star Wars - regardless of the fact that that one of his primary designers, Joe Johnston, also worked on that show.

Contrary to some old memories, no rocket-firing Boba Fett figures were ever released to the public and all known examples are prototypes that can be traced to Kenner employee origins. After weeks of waiting children across the country, who previously had no idea about the Mattel problems, would finally have their day at the mailbox. However, when they opened the little white mailer box their excitement quickly turned to disappointment as they read the notice explaining that the rocket-launching feature they were so eager to try out had been removed for safety reasons. They just got a bland figure with a fixed rocket that looked nothing like the one they sent away for. I know because I was one of them myself.